In the year 1348, while the Black Death went scything through Italy, ten young people took refuge in the countryside outside of Florence. To pass the time while they waited for the Reaper to be on his way, they told each other a series of stories.

On the third day of story-telling they elected Neifile as their queen of tales. She wanted to hear stories about people who attained the objects they desired, but only by virtue of their own efforts. There followed many windings and turnings, searchings and yearnings, until ten worthy objects were wrestled from the flux by even worthier hands.

Then, as on the previous two days, they all looked up from Boccaccio’s dusty pages and waited to hear the tale that I would tell.

“We enjoyed your first story and your second story very much,” Neifile said to me. “In fact, we spent much of last night discussing the themes they have in common – themes that are not at all unfamiliar to us. Money, sex, friendship, betrayal, the whims of fortune. Perhaps we don’t know what a Ford Fusion is, not precisely, but it doesn’t sound much different than a horse. We have been saying how strange and wonderful it is, that even across the chasm of seven hundred years we understand you so easily! We hope the understanding is mutual. (Did you like Filostrato’s story about the axeman, who pretended to be deaf and dumb so he could infiltrate the convent and enjoy the company of the nuns? That one was my favorite.) At any rate we beg you once more to speak freely and in keeping with your own times. Shock us and ravish us! Black Death or Covid, we are in the same predicament. The centuries cannot stand against us.”

I thanked Neifile for her kind words, and after warning them all that I couldn’t hope to rival Filostrato’s story about the nuns, I gave them another swill from the dregs of 2020.

the tale of Dick Long Harding

There was in recent years a certain man from Minnesota, whom we might as well call Dick Long Harding, for he developed in his middle age a rare and raging affliction.  It was a condition that delighted both he and his girlfriend for the first several hours during which it occurred; but after a whole day of it she was sore in every hole and he was dangling at the edge of a heart attack.  They decided together, breathlessly, in an apartment that was completely destroyed, that he should consult a doctor about his sudden insatiability.

In the year 1348, while the Black Death went scything through Italy, ten young people took refuge in the countryside outside of Florence. To pass the days as they waited for the Reaper to be on his way, they told each other stories.

On the second day of story-telling they elected Filomena their queen. She demanded from each of them a tale of misfortune, which must end unexpectedly with happiness. So one by one they went stumbling through hazards and sorrows, until ten happy endings left them breathless under the setting sun.

Then, as on the first day, they all looked up from Boccaccio’s dusty pages and waited to hear what I would say.

“We enjoyed your first story very much,” said Filomena, “and we appreciate that you told it according to our fourteenth century customs. But we beg you to speak more freely and in keeping with your own times. Shock us if you must. We won’t hold the centuries against you.”

So I told them a tale from my own time, inventing at will as I went along.

the tale of the Ford

Once upon a time there was a

some kind of engine

The lady wanted seven thousand for it, but Josh had talked her all the way down to five.  On condition that he paid cash today.

END_OF_DOCUMENT_TOKEN_TO_BE_REPLACED

The gates of Psycho Pasture opened after Jim ate the banana, and the whole host of pedophiles was unleashed upon the grand plane of paradise. There were some like Jim and the King, who had suffered innocently in the unlucky crossfire between the devil’s conceit and humanity’s prejudice – but most were pale and greasy and thoroughly guilty. Tens of thousands of child-raping men and women stepped out into the light and were bewildered by it. END_OF_DOCUMENT_TOKEN_TO_BE_REPLACED

The Psycho Rapist Pasture wasn’t really a pasture. It was more like a circular prison that never came around all the way, and in the middle there was an off-limits garden. Jim figured calling it a pasture was some kind of euphemism.

“And if you’ll look over here,” said the chipper tour guide, “you’ll see the Masochist Chambers, where psychotics can torture, bind, mutilate, and rape a few lucky visitors. The facility is equipped with every known torture machine devised by man, dating all the way back to the bronze age – and a few that the angels cooked up themselves.” END_OF_DOCUMENT_TOKEN_TO_BE_REPLACED

Hey guys, not sure if there’s any of you still out there.  Haven’t posted in a while.  But that short film based on my Jim stories is finally available online.  Here it is in all of it’s irreverent glory: (password is 1truthroad)

Thanks to everyone involved for a wild ride, and especially to you if you’re reading this.  If you’re one of the 8 billion people that hasn’t checked out the illustrated novel yet, it’s free for a couple of days:

Abdulaziz al-Omari stood on the corner of a busy intersection in Downtown Paradise. He rang a bell and wore a cardboard sign that said, 911 was an inside job. He looked weathered.

Jim watched him from the veranda of the ice cream shop, spooning sundae into his mouth. The terrorist didn’t wear much for an expression – maybe it was sober and kind of defeated – and he just rang his bell with long steady swings of his arm. Every now and again a passerby dropped a nickel in his tin can. END_OF_DOCUMENT_TOKEN_TO_BE_REPLACED

The Downtown Apocalypse Exchange was on the corner of Smoke Street and Mirror Avenue. Steel and glass rose out of the thoroughfare and knifed into the Paradise sky. Jim followed Rockefeller in through the revolving doors. END_OF_DOCUMENT_TOKEN_TO_BE_REPLACED 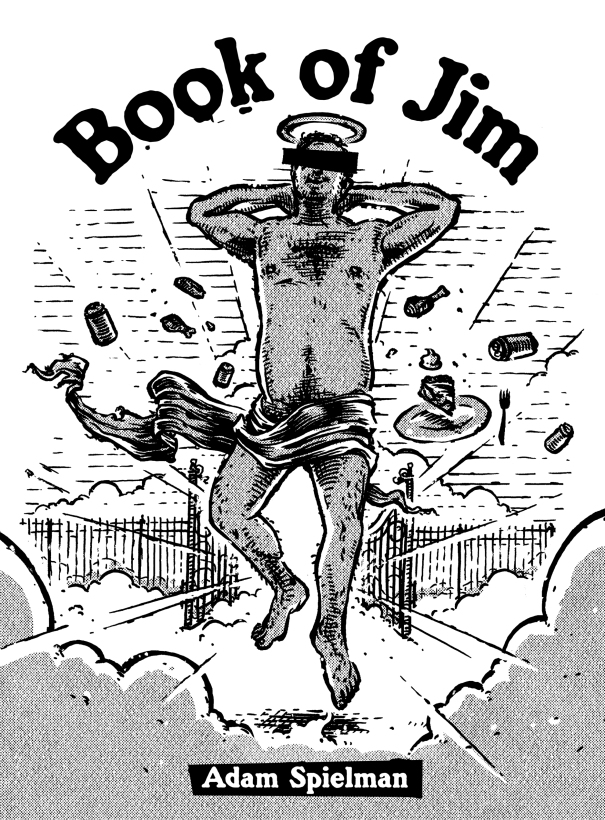 The Book of Jim: Agnostic Parables and Dick Jokes from Lucifer’s Paradise – finally published.  Took me a few more months than I thought it would, but it was worth it.  The paperback is slick as hell, the kindle works great, the illustrations are fantastic.  Really happy with it.  If you’re a nook-head, the nook version will be available as soon as I can get it to work.  Epub is a nightmare when it comes to images.  Anyway, here are the amazon links to the paperback and kindle editions:

The stories are still floating around on the blog, free as ever.  Metadirt Part 2 coming soon.

Well, if you’ve been following these crazy stories at all, you’ll have noticed that there’s been a significant drop in the rate of posts lately.  I finally got another story uploaded – if you didn’t see it on the main page it’s right here.  It’s a two or three parter, so expect some more soon.

As for the novel, the manuscript is finished and the illustrations and cover are on the way, and all that’s left is the drudgery of formatting.  The Book of Jim will be available in paperback, kindle, and nook real soon.  For real this time.  I promise.  If it’s not, I’m either dead or insane or both, and you should probably look for something else to read.

The short film Limbo is finished.  I’ve seen the final cut, and it’s hilarious.  I love every second it.  Fangso and Haines did a brilliant job on it.  Most recently it’s been accepted to a film festival in Florida, and we’re waiting to hear from Tribeca.  If you’re one of those amazing and intellectually disturbed people who put money into the kickstarter, hopefully you’ve gotten all the updates and goodies you were promised.  If otherwise, get a message to me and we’ll make sure you get sorted.  The film itself, you’ll have to wait a little while longer while it runs through the festivals.  They can’t release it while it’s “on the circuit”.  How big of a while I’m not sure.  Probably a few months yet.  And after that, it will be available for free online.  Especially on this blog.

That’s it for now.  Expect the book and some more stories soon.

There was a knock on the door. Jim opened it, expecting cake or tits or something else that was nice. Instead he got a face full of Billy Mays.

“Hey Jim! Remember me? We met at Lucy’s party. Well we didn’t really meet, you wore my head around for a while before you bashed everybody’s limbs off with a baseball bat. Of course you remember me. It’s the beard, everyone remembers the beard. You mind if I come in? I think I should come in. This is a lovely house! Wow! I love the couch! Is that Chenille?”

“Um, I don’t know. What are you doing here?” Jim wasn’t wearing pants.

Billy sniffed the coffee table. “Pine was a good choice,” he said. “Have you ever considered purchasing insurance against the eternal, Jim?” END_OF_DOCUMENT_TOKEN_TO_BE_REPLACED